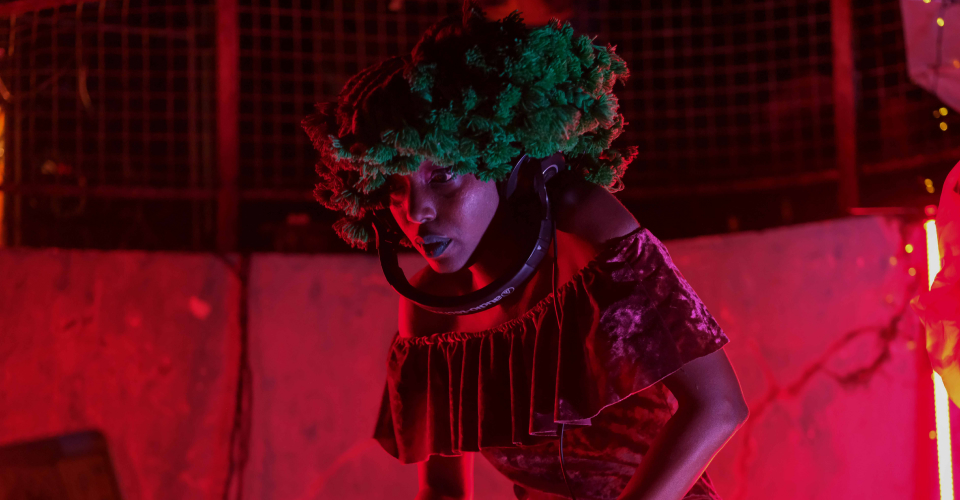 Darlyne is a Ugandan self-taught photographer and multi-media artist.
She works mostly collaboratively to investigate and edify the things she cares about; femininity, blackness and connectedness. Her feminist ideals are vital to her projects and she will be found
working with other women to make some cool shit for even more women to enjoy. Her photographs are full of regal, statuesque black women, colour and a call back to the natural world.

Her visual art projects include; The Salooni, a multi-media roving installation made together with 3 Ugandan women investigating and celebrating Black hair, Our Things, a video archive installation made with one other Ugandan woman collecting stories about similar Ugandan experiences, and, Penthouse, a rage room on a rooftop in the middle of downtown Kampala where Kampalan women could safely express and manifest their rage.

Her projects, Decay and Cardi Monáe, serve as her sonic explorations. With Decay, as a DJ, she is interested in feeling and sharing the joy of the power of the femme. Whether she’s playing trap, dancehall, ballroom or the stankiest twerking music, it’s in service to freedom for the
femme body and spirit. With Cardi Monáe, as a producer, she is interested in translating her artistic pursuits, which include photography, videography and installation art, as well as her influences into music. Her music will soon be released on the Hakuna Kulala label. Her work has appeared on CNN, BBC, The Guardian, Quartz and OkayAfrica. Her work has also been shown at the Southbank Centre in London as part of the Africa Utopia Festival, Constitution Hill in Johannesburg as part of the Being Her(e) Exhibition, the Chale Wote Festival in Jamestown in Accra, the Africa Bass Cultural festival in Ouagadougou and at multiple locations in Kampala, Uganda.