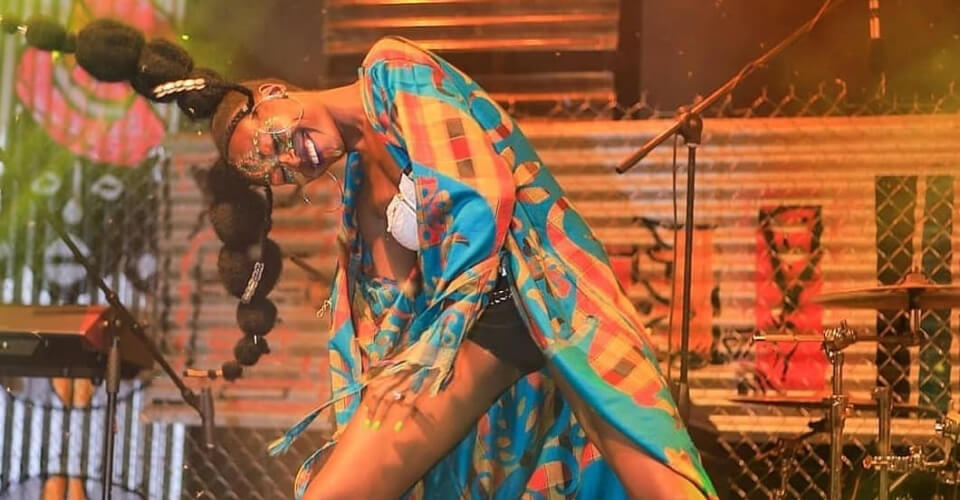 Catu Diosis is a free spirited, energetic, forward moving African Diva. Her music is flavorful, highly danceable, always an afrocentric blend of global music, taking you from Luanda to Sao Paulo, from Kampala to Bamako in a second, with stops anywhere from Santa Lucia to Abidjan, Durban and Nairobi.

Catu is based between Kampala and Cologne,she’s an active member of the Nyege Nyege Collective and founder of Dope Gal Africa (DGA), an organization that supports and nurtures African & Diasporan Female & femme identifying talents.

“Too many amazing female artists on the Continent, and not enough are given the opportunity to shine”, that’s how DGA got started and how Catu has used her international career as a platform to champion others.

Catu has played Panorama Bar during CTM, Eurockeennes, Nyokobop Festival in Paris,Festival Variations at Le Lieu Unique,Tremor festival and most recently graced the Uganda’s first ever Pavilion at the estimmed Biennale in Venice.she’s also resident DJ at Nyege Nyege Festival, where she has played since 2017, including a legendary main stage performance with her Dope Gal Crew in 2019 and a memorable Boiler Room performance that same year. Catu Diosis also produces music, and was featured in the WIRE magazine’s monthly compilation with her track Choc Kedda, an experimental take on Acholi music released on Syrphe.

She’s currently working on her next EP, as well as a Dope Gyal Project with A female MCs and dancers. As part of DGA, Catu hosts a monthly DGA show on Sphere radio, has given DJ workshops in Zanzibar, Kampala, Lusaka, Harare and Cologne, where she currently organizes events and holds a residency on Cosmo Radio.

While in Cologne, Catu  linked up with Cape Verdean German femcee Lorena under a project called Dope Gal Magic (a collaborative EP that explores her production and rap skills together with Lorena’s hype mc energy ) releasing this summer 2022. While back in Uganda, Catu Diosis also  joined forces with R3ign Drops  alias Black sistarz and are  working on their first ep together and preparing for their first European gig together at Documenta in Kassel Germany 18th June 2022.